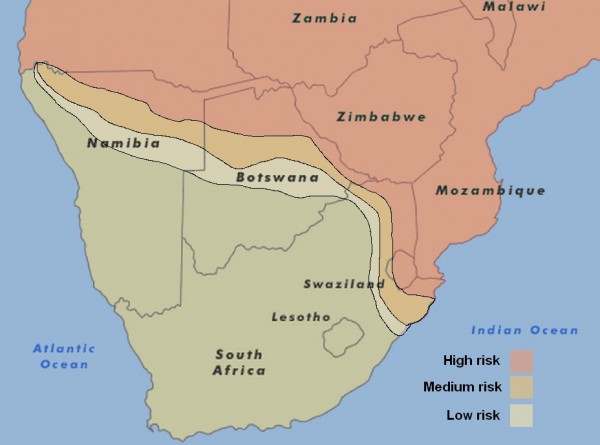 Malaria areas change with seasons and over the years. Always check with a local GP or heath service which course of protection is best for your personal circumstances.

Malaria remains one of the most feared illnesses world-wide. In southern Africa Malaria is second to HIV/Aids in causing illness and death. Holidaymakers can protect themselves efficiently.

Please note that the following information is not intended to replace an individual consultation with a doctor or pharmacist!

Malaria is transmitted through the bite of a female Anopheles mosquito which carries the pathogen in it because it has previously bitten a person already infected with malaria. This means that if there are no mosquitoes there is no malaria either. Do note, however, that where there are mosquitoes there is not necessarily malaria.

The characteristic symptoms of malaria are similar to those of diarrhoea or flu: high fever with shivering fits, headache and aching limbs, severe sweating and dizziness. Malaria can certainly be treated if recognised early; without treatment it can become life-threatening. Incubation for the disease is four to six weeks. Should you experience cold-like symptoms during this period you see a doctor immediately and inform them that you have been to a malaria area!

Although there is no vaccine against malaria, several prophylactic medicines are available, including homeopathic ones. Ask your doctor or one of the many institutes for tropical diseases for advice. In most European countries malaria prophylaxis is available on prescription only. In southern Africa it is sold over the counter and it often costs less than overseas. Doctors and pharmacists in southern Africa can also advise you on which prophylactic to choose. Usually you need to start taking the tablets one week before you travel to a malaria area and continue for four weeks afterwards. Unfortunately there is no protection on which you can rely 100%. Should you notice any of the symptoms despite taking prophylaxis, you should still see a doctor without delay. However, due to the prophylaxis the test may show positive even if you only suffer from a cold and you might be treated for malaria without having the illness. In addition, malaria tablets are known to cause nausea, illusions and upset stomachs. With this in mind, many people discard the prophylaxis and rely on the most effective protection – avoid mosquito bites!

This is how you keep mosquitoes at a distance
Put on repellent, especially in the evening, at night and in the morning. Effective repellents like ‘Peaceful Sleep’ and ‘Tabard’ are widely available in Namibia.

At dusk and during the night wear clothes which cover arms and legs and choose light colours.

Use insect sprays or repellent incense sticks and spirals in your room. These are available in supermarkets and pharmacies.

Sleep under a mosquito net which is usually fixed above your bed if you are in a high-risk area.

If you sleep in a tent, make sure that the flap and windows are fitted with mosquito gauze.

Send us an e-mail